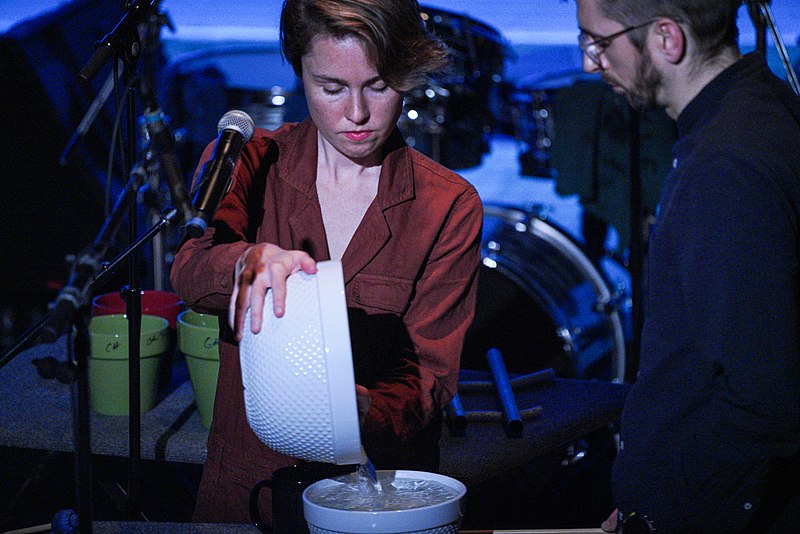 Caroline Shaw with Attacca Quartet and So Percussion at the Miller Theater, Columbia University. Photo by Stephan Pisano, made available by CC BY 2.0

In light of the Diverse Programming Initiative in the Presser Music Library and this year’s Wells School of Music concert schedule, it seems appropriate to introduce blog readers to some of the esteemed composers being highlighted and performed.  One such masterpiece we have heard has come from the West Chester University Chamber Orchestra’s late September performance of Entr’acte, by Caroline Shaw. This work of art, originally meant for string quartet, has  wonderful pulsating chords contrasting between arco strings, soft percussive sounds, and pizzicato sections which elicit a soundscape that seems to take you from the world of reality into a fantasy of vibrant sounds and colors. It is a piece divided between soft moving chords and a series of excitable movements and techniques which appear in flurries of color. The wide range of technique and emotional response is reminiscent of the entr’acte between acts of a play, which often connect themes from multiple sections of the play - showing the clever creativity of Caroline as a composer.

Caroline Shaw, a vocalist, violinist, composer, and producer based around New York City has produced fantastic works for string quartet, choir, a range of duets, and solo pieces. In 2013, at the age of 30, she was the youngest-ever recipient of the Pulitzer Prize for Music. She also composed all the music for the Grammy-winning album Orange, recorded by the Attacca Quartet from Brooklyn, New York. Her Pulitzer-prize winning work, Partita for 8 Voices, is described by the critic Matthew Strauss as a stunning array of moving voices with beautiful and fantastical precision and control, while James Bennett II writes that the Orange album harkens to the simplicity and wildness of nature.

Even more intriguing is Shaw’s unique blend of performance and composition, achieved through performing with stars such as Kanye West on his album The Life of Pablo. She sings with the exploratory vocal group Roomful of Teeth and features as solo vocalist on the album Let the Soil Play its Simple Part, written and performed with the percussion ensemble So Percussion (listen to the album on Naxos Music Library). The intensity of the vocal works showed both the power of her voice as a performer and a melding of the corporeal and fantastical in her exquisite compositions. Allison Hussey in a review for Pitchfork gives a wonderful, deeper explanation of the masterpiece.

I would encourage anyone interested in this fantastic artist to dive into her numerous works listed on the Diverse Programming Initiative page and read a little about her through her website. Also listed are links to the two pitchfork reviews. With such a decorated and highly acclaimed reputation it is only a matter of time before this composer brings the world even more incredible works to explore.