Carlos Antonio de Padua Chávez y Ramírez was born June 13, 1899, in Mexico City. The seventh child of the family, he started learning piano from his older brother Manuel at age nine. Later, he studied with Asunción Parra, Manuel Ponce (1910-14), and Pedro Luis Ozagón (1915-20). Chávez completed his formal studies at the National Conservatory of Music in Mexico City and received his diploma in composition.

Chávez is revered as one of the most influential composers, conductors, and music educators in Mexican history. Crucially, his family often visited regions where the rich culture of indigenous peoples deeply influenced him. After the Mexican Revolution, Chávez became one of the first composers to create Mexican nationalist music inspired by the Aztecs.

Between the years 1928 and 1934, Chávez was the director of the National Conservatory, and while in this position he developed a new curriculum that emphasized studying the folk and popular music of Mexico. He taught composition and inspired a new generation of Mexican composers, among them Candelario Huizar, Silvestre Revueltas, Daniel Ayala, Blas Galindo, Salvador Contreras, and José Moncayo.

Chávez was known for weaving indigenous melodies and instruments into contemporary classical compositions which sometimes included electronic music and multimedia elements. His ballet H. P. (Horsepower), also known by the Spanish title Caballos de vapor, is a colorfully orchestrated score of ample dimensions and dense, compact atmosphere, notable for its dynamism and vitality. The work reveals the influence of Stravinsky as well as folkloric and popular elements, including dances such as the sandunga, tango, huapango, and foxtrot. Click here to listen to a NAXOS recording of H.P. ballet. This piece was written to symbolize the economic relationship between the industrial United States and the agricultural tropical lands. The ballet was first produced in Philadelphia in 1932.

Chávez was also the director of the Mexico National Symphony Orchestra, the second oldest orchestra on the North American continent. He excelled as a conductor, leading Mexico’s top orchestras as well as ensembles around the world. He even filled in for Arturo Toscanini, conducting the NBC Symphony Orchestra. For many years, he maintained a busy international schedule. He was guest conductor for the Boston Symphony Orchestra in 1936 and the New York Philharmonic in 1937.

As a composer, Chávez is often linked to the United States by his contemporary, the iconic American composer Aaron Copland. Both composers worked to create a distinct musical sound world that spoke to their home countries. He wrote two books: Musical Thought, available at Presser Music Library by clicking here and Toward A New Music: Music and Electricity, which became a major contribution and fundamental document of new musical era, also available at Presser in this link. 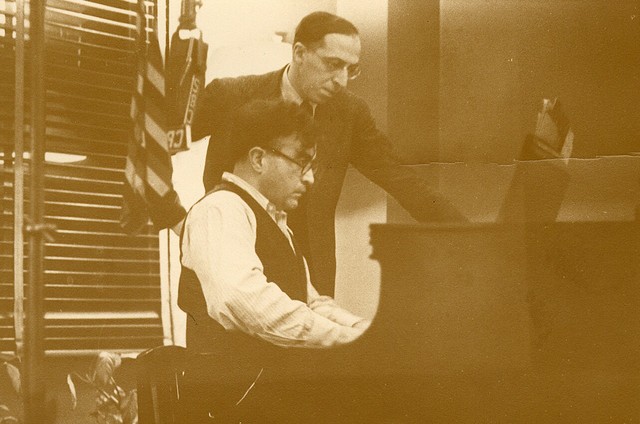 But Chávez was not simply a “Mexican composer” – some works may sound more closely related to Shostakovich, Britten, or Prokofiev. Other compositions have a sound of their own, his style varies broadly and the results can never be predicted. In his widely performed Symphony No. 2, Sinfonía India, which uses native Yaqui percussion instruments and actual indigenous melodies, he is clearly tapping into his roots. Click here to listen to his Sinfonía India available at NAXOS.

Struggling with his finances and health, Chávez was forced to sell his house and move in with his daughter in later years. Before his death, he was awarded honorary memberships in the American Academy of Arts and Sciences and the American Institute of Arts and Letters. He passed away in Mexico City, August 2, 1978. His manuscripts are kept both in New York City and Mexico City.