Astor Piazzolla was born in Mar del Plata, Argentina on March 11, 1921. A child prodigy on the bandoneón, a type of concertina used in most 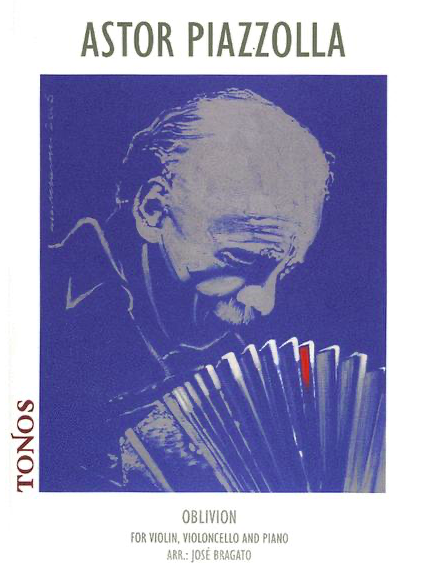 tango ensembles, Piazzolla and his family emigrated to New York in 1924. In his teens he became acquainted with the renowned singer, songwriter, actor, and tango musician Carlos Gardel. Piazzolla returned to Buenos Aires in 1937, where he gave concerts and studied classical music with Alberto Ginastera. In 1954 he composed a symphony for the Buenos Aires Philharmonic Orchestra which won him a scholarship to study in Paris with Nadia Boulanger, who encouraged him in the composition of tangos. After playing one of his tangos for her, she said that this was the music he should be writing—the music from his heart and not from his head. In 1955 he resettled in Argentina and formed the Octeto Buenos Aires and, later, the Quinteto Nuevo Tango.

Piazzolla’s jazz influence was shown in many of his pieces but in his later years he tended to hold true to the original tango. One of his most famous pieces is known as “Oblivion.” It was composed in 1982 and remains one of the most popular tango pieces to date. The piece gained popularity when featured on the soundtrack of Marco Bellochio’s film Henry IV, the Mad King. “Oblivion” has many recorded versions, including for klezmer clarinet, saxophone quartet, and piano trio.

In José Bragato’s arrangement for piano trio held by the Presser Music Library (call number 785.73 P584 O2, watch us find it here), the featured instruments enter immediately over a subtle, arpeggiated accompaniment with a melancholic melody— long-held notes alternating with slowly falling and weaving figures. A middle section offers a minimally contrasting theme, lush but less intense. “Oblivion” evokes sadness, it also has a harmonic sophistication and whispered sorrow. It is a song about love and sadness, a beautiful piece, full of emotion and elegant notes. Click here to listen to a recording available from the library streaming music database NAXOS, performed by the Devich Trio.

By mixing traditional tango into electric instruments in his ‘New Tango’ ensembles, Piazzolla created a new music that was both experimental and traditional; rhythmic and refined; hot and cool. A legend during and beyond his lifetime, Piazzolla died in 1992 at the age of 71. His daring, genre-blurring music is still played around the word by symphony orchestras, chamber ensembles and jazz groups. It can also be heard on his many albums, whether in concert or on record, the brilliant intensity of his music is constant.