Check out our Spotify playlist below!

Agustín Barrios was born in the small town of San Juan Bautista de las Misiones in Paraguay on May 5th, 1885. His father, Doroteo, had come to Paraguay from Argentina and worked as Paraguay's commercial vice-consul; his mother, Martina Ferreira, was a native Paraguayan who worked as a schoolteacher. Barrios began playing his father’s guitar at around age seven.

Renowned guitarist Gustavo Sosa Escalada convinced Barrios' parents to send young Agustín to the Instituto Paraguayo in Asunción, about 125 miles from San Juan Bautista. He lived in Asunción during his adolescence and studied classical guitar with Sosa Escalada and music theory with Italian violinist Nicolino Pellegrini.

In 1910 he departed Paraguay and journeyed to Buenos Aires, where he perfected his guitar technique and repertoire by studying the works of other guitarists, including Julio Sagreras, Domingo Pratt, and Miguel Llobet. Between the years 1913 and 1914 Barrios made phonograph records for the Atlanta/Artigas label in Buenos Aires. In 1920, he based himself in Uruguay for the next nine years.

In 1921, Barrios composed his most widely played composition, La Catedral, which figures among the concert guitarist's greatest repertoire. In the first volume of The guitar works of Agustín Barrios Mangoré 1885-1944, you can find La Catedral on page 224.  Click here to listen to a John C. Williams recording at NAXOS music library.

In 1930 Barrios left southern South America and began presenting himself as Nitsuga Mangoré (Agustín spelled backward and Mangoré a legendary Guaraní chieftain), appearing onstage with feathers and headdress. Basing this persona on a sixteenth-century chieftain from the indigenous Guaraní culture, Barrios appeared in costume and employed poetry and props to enhance his guitar concerts. Over the next few years, Barrios took the Nitsuga Mangoré identity to South and Central America, parts of the Caribbean, and finally Mexico. This is how Nitsuga Mangoré would present himself onstage. 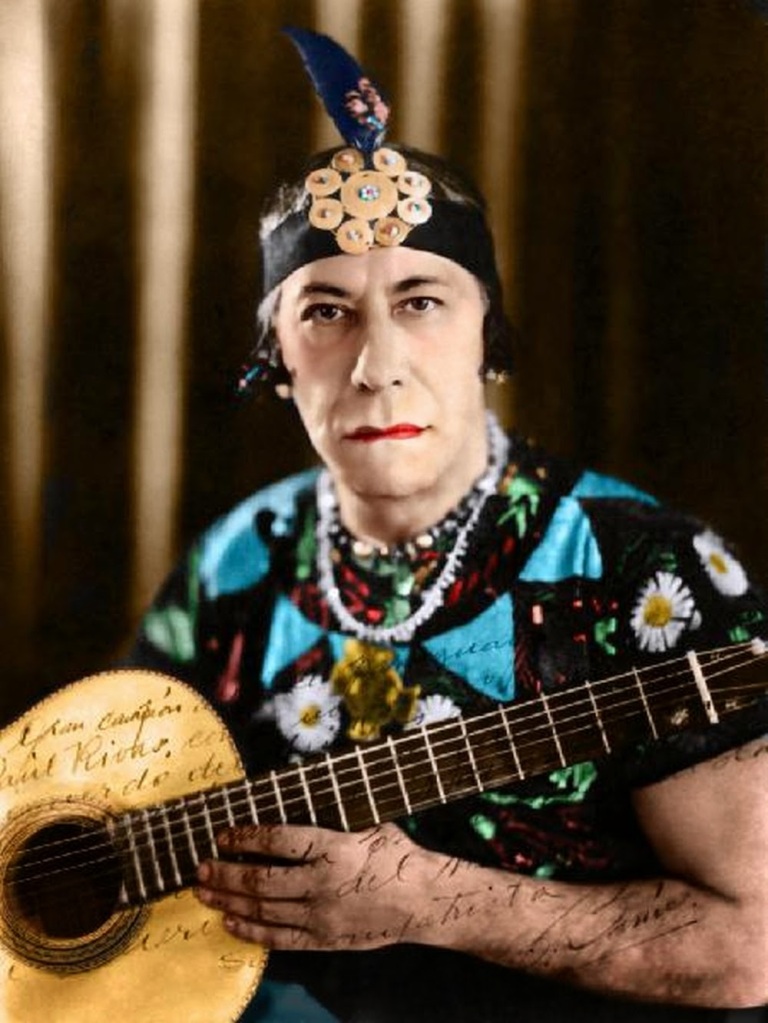 Barrios arrived in Mexico City in 1933, where he met the Paraguayan diplomat Tomás Salomoni, who took him to Europe in September 1934. In 1939 he toured El Salvador and Guatemala. He lived the last four years of his life in El Salvador, where he continued to compose, teach guitar, and play concerts. He received a professorship at the National Conservancy from President Maximiliano Hernandez Martinez, an appreciator of guitar and a fan of Barrios.

His pupils admired him, and he required them to play to the utmost of their abilities. Between 1940 and 1944, Barrios composed many guitar works, including some pieces for two and three guitars. His final work, Una Limosna por el Amor de Dios was composed in May 1944. You can also find this piece in Volume 2 of The guitar works Agustín Barrios Mangoré 1885-1944 on page 96.

On August 7, 1944, Barrios suffered a heart failure in Guatemala City, far from his native Paraguay. Mangoré composed over 300 works for solo guitar. Also, he made over 30 recordings, including what may have been the first recording of a classical guitarist on vinyl record. For many years after Barrios's death, his life and work were remembered only in his native Paraguay. However, beginning in the 1970s, his music found a wider audience thanks to the performances of Australian guitar John Williams and American guitarist Richard Stover. Today, the music of Barrios is part of the classical guitar repertory and receives ever-increasing attention.

An interesting fact is that Barrios is a great source of national pride in his native country. A bank note in the denomination of 50.000 guaraníes was issued by the government of Paraguay, with a portrait of Barrios on the front and a guitar on the back. In 1994 several stamps were issued to honor the 50th anniversary of Barrios'. Here is a link to see the bank note of 50.000 guaraníes.