HIS 400 (Kirschenbaum): The Experience of World War II

For remote learning--- this video will show you how to request a library book be held for you for pickup or mailed to you.

We have any books that include direct narratives of World War II, both from soldiers and others who lived during the period.

To find these types of books, it helpful to think about not only keywords that might appear in a books title, but the language used by official subject headings.

World War II is often how the war appears in the title, but  World War, 1939-1945 is the official subject heading.

Diaries and memoirs are referred to in the subject headings as personal narratives.

Letters are correspondence in the subject headings.

To see an example of using both keywords and subject headings while searching, see the video below.

The library catalog really isn't set up well to search specifically for fiction on a topic or time period.  I'd suggest doing web research to identify works that you are interested in working on, then checking the catalog for a specific title or author to see what we have.

One caveat:  All these collections tend to have very long coverage periods, but they are not equally strong across eras.  I do not have a good feeling for which, if any, of these is strong for WWII.

These databases include a lot of documentaries (i.e. secondary sources) but also have many videos that could count as primary sources, like interviews, speeches and newsreels.  See the images below which show you how to access the database filters and use them to focus on primary source materials.

Step 2:  These two filters are the best for narrowing down to primary sources 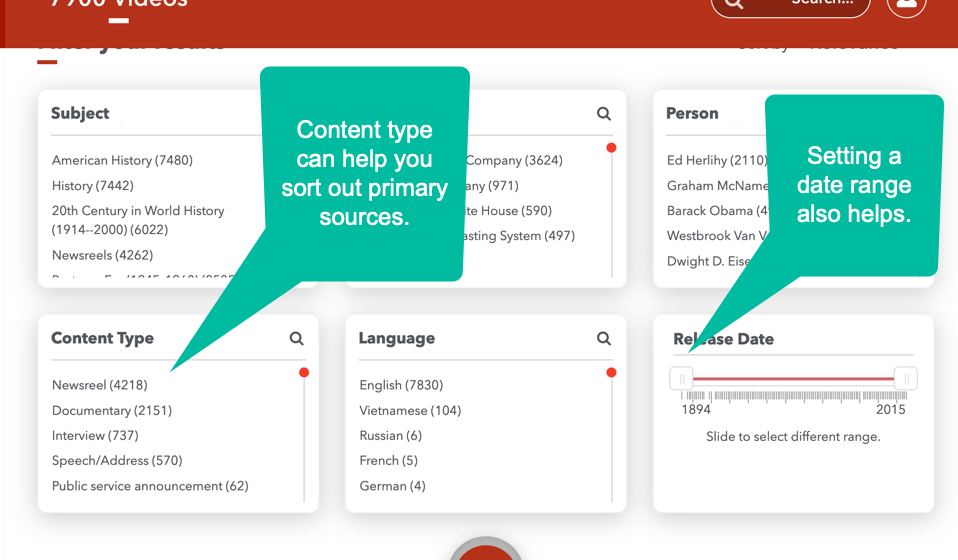 There are many digital repositories out there that will have digitized images from WWII, but the libraries also have a couple of databases to keep in mind.