I don’t know about you, but lately I’ve felt overwhelmed by the news of, well, so many terrible things.  Along with my own uneasy feelings associated with the pandemic and anxiety about the future, I find myself drawn to more light hearted or sentimental entertainment.  For my previous recommendation I chose a film I love but only on DVD at WCU libraries.  I thought this time I would try to find something we have streaming.  It has been difficult.  Most of the feature films we have licensed are not what very upbeat and while I do like a good documentary a vast majority are created to bring awareness to difficult or troubling issues; not quite what I’ve been looking for recently.  However, there is one I want to recommend, Wonder Women! 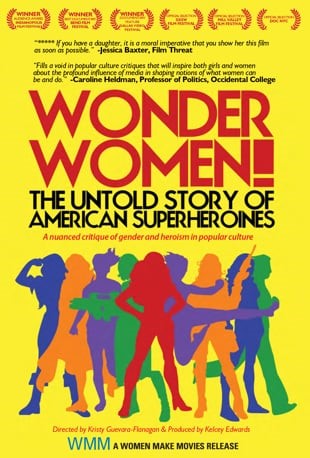 You may have noticed Hollywood has been releasing a lot of super hero movies in recent years (that could be its own post).  You may have also noticed how few female super heroes there are in this super hero movie wave, or at lease how few get the spotlight.  In 2017 director Patty Jenkins brought us one of the few, Wonder Woman.  This feature film really resonated with me and, according to reviews, a lot of other women.  Her Wonder Woman is a trained warrior dedicated to kicking evil’s butt, standard super hero stuff.  But she is also compassionate and hopeful, softer things not usually associated with heroes.  The documentary Wonder Women! follows the history of Wonder Woman starting with her creation and first appearance in 1940’s comics and discusses how the character evolved to reflect cultural trends.  The film also touches on the female hero in more modern media and the influence of Wonder Woman as an icon of feminism.

While this might sound dry, it’s not at all.  Images from the comics and interviews with scholars are intercut with stop motion animation and interviews with fans at a convention, a comic shop owner hosting a fundraiser, 70’s TV Wonder Woman actress Linda Carter, Riot Girrrl era singer/song writer Kahleen Hanna, and others.  Toward the end of the documentary one of the interviewees expresses a wish for a new Wonder Woman feature film.  Sadly, this documentary was released in 2012 so the Patty Jenkins feature film is not discussed but it is easy to see how it fits into the themes presented.

This was a bit of an odd acquisition and is not in the catalog. Previously available on Kanopy, the film makers are now only offering either a purchase of a digital copy which we would have to host, or a rental on Vimeo.  In order to get fast access for a spring class we went with a three month Vimeo rental.  If you’re not familiar with Vimeo it is a platform developed for individual viewers and creator; think YouTube only a bit more highbrow.  The makers of Wonder Women have arranged to make it available to us for multiple users using a coupon code. We have access until July 14 and if you are interested all you need is a Vimeo account, basic accounts are free, and the coupon code, which you can get from me.