The Lodger And M

One thing I find so wonderful about movies is their newness as an art form. The birth of films is relatively recent and the evolution of the medium has been quick.  It’s taken less than 150 years to go from the earliest films of Muybridge, Melies, Edison and the Lumiere brothers to the current blockbusters and art-house films.  It is fascinating to follow how styles and trends influence those that come after.

With that in mind it is amazing that it took me so long to make the connection between German Expressionism, think Metropolis, and Film Noir, think The Maltese Falcon.  I have been fascinated by German Expressionist films for a long time, having been a bit of a Goth kid, and really what self-respecting Goth wouldn’t love The Cabinet of Dr. Caligari! 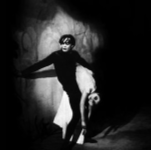 The Cabinet of Dr. Caligari

As I got a little older I noticed the similarities of German Expressionism to Film Noir; dramatic use of shadows, dark themes, odd angles that create a feeling of unease, a pervasive atmosphere of impending doom.  For the longest time I thought these similarities were just a matter of artistic evolution or recycling, like the prevalence of Egyptian motifs in the 1920’s after the opening of Tutankhamun's tomb. What I didn’t realize until much later was the connection is more direct.  Expressionist directors who fled Germany before WWII came to Hollywood and continued their work here.

Which brings me to the interplay of The Lodger and M.  The Lodger is one of Alfred Hitchcock’s earliest feature films.  It is a silent film produced in 1927 and considered by many, including Hitchcock himself, to be his first truly Hitchcockian film.  Before making The Lodger Hitchcock was involved with a project in Germany at the state run UFA studio where several prominent Expressionist filmmakers such as Fritz Lang, and F.W. Murnau, were also working.  The plot of The Lodger is inspired by Jack the Ripper and the visuals are an intriguing blend of German Expressionist film motifs, including the stylized melodramatic acting, and Hitchcock’s hallmark suspense. The killer is unknown and Hitchcock creates the same tension and suspicions for the audience as the characters in the movie.

In 1931 a Fritz Lang released M, a film about a serial killer in Berlin made at the advent of sound in cinema and just before Lang left Germany.  Unlike The Lodger, the tension is not in who the killer is but in the moral ambiguity of mob justice. The suspense in this movie is amazing and the use of shadows and reflections really illustrate the evolution from Expressionism to Noir.

Silent film is not everyone’s cup of tea and the stylized nature of German Expressionism is sometime hard for modern audiences to enjoy, however, there are many wonderful films from this era. I still see the influence on film today, especially horror, and Noir seems to just keep coming back.  All the titles in this review are currently available free on YouTube or Internet Archive.  Happy Viewing!